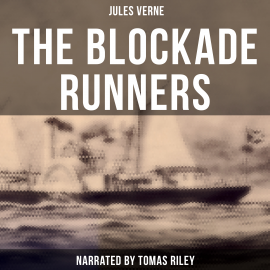 The Blockade Runners is a story by Jules Verne. The American Civil War plot centers on the exploits of a British merchant captain named James Playfair who must break the Union blockade of Charleston harbor in South Carolina to trade supplies for cotton and, later in the book, to rescue Halliburtt, the abolitionist journalist father of a young girl held prisoner (the father, not the girl) by the Confederates. Verne's tale was inspired by reality as many ships were actually lost while acting as blockade runners in and around Charleston in the early 1860s.

Artist Bio Author:
Jules Verne (1828-1905) was a French novelist, poet, and playwright best known for his adventure novels and his profound influence on the literary genre of science fiction.
Nach oben