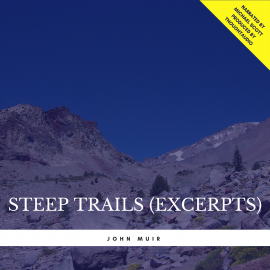 These four excerpts, from the writings of John Muir, document his naturalist studies in a number of different settings. These highly descriptive stories detail his expeditions in the rugged outdoors. His documented studies led him to an awe of the natural splendors of the earth, and eventually to a position of preservation. His direct activism helped to save the Yosemite Valley and other wilderness areas.