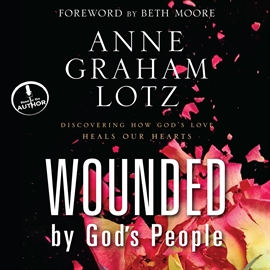 Hurt by God's people... Healed by God's love.
Everyone has been wounded…hurt…neglected…by others. But as Anne Graham Lotz looks back on her life, the sad truth is that her most painful wounds were inflicted by religious people — God’s people. People she had grown to love and to trust. But people whose words and behavior were inconsistent with what they said they believed. Anne not only understands the wounded, she also understands how easy it is for the wounded to become wounders themselves.
Maybe you are among those who have been so deeply hurt by the church that you no longer want anything to do with God. Perhaps you are a wounder living in a self-imposed exile, believing yourself unworthy to be restored to a warm, loving relationship with God or His followers.
In this book, Anne breaks the silence of the wounded and the wounders, in order to break the cycle of pain. Drawing on the biblical story of Hagar, Anne leads those who have been hurt by God’s people on a path of discovering the healing power of God’s redemptive love. This audio book is a love story…yours!
Nach oben