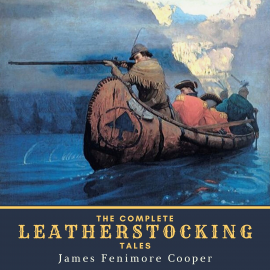 The Complete Leatherstocking Tales includes the five full-length novels featuring Natty Bumppo.
The Leatherstocking Tales is a series of five novels by American writer James Fenimore Cooper, set in the eighteenth century era of development in the primarily former Iroquois areas in central New York. Each novel features Natty Bumppo, a frontiersman known to European-American settlers as Leatherstocking, The Pathfinder, and the trapper. Native Americans call him Deerslayer, La Longue Carabine (Long Rifle in French), and Hawkeye.
Included in this collection:
1. The Deerslayer, or The First War-Path (1841) was James Fenimore Cooper&apos;s last novel in his Leatherstocking Tales. Its 1740-1745 time period makes it the first installment chronologically and in the lifetime of the hero of the Leatherstocking tales, Natty Bumppo. The novel&apos;s setting on Otsego Lake in central, upstate New York, is the same as that of The Pioneers, the first of the Leatherstocking Tales to be published (1823).
2. The Last of the Mohicans: A Narrative of 1757 is a historical novel written by James Fenimore Cooper in 1826. It is the second book of the Leatherstocking Tales pentalogy and the best known to contemporary audiences. The Last of the Mohicans is set in 1757, during the French and Indian War (the Seven Years&apos; War), when France and Great Britain battled for control of North America. During this war, both the French and the British used Native American allies, but the French were particularly dependent, as they were outnumbered in the Northeast frontier areas by British colonists. The novel is set primarily in the upper New York wilderness, detailing the transport of the two daughters of Colonel Munro, Alice, and Cora, to a safe destination at Fort William Henry. Among the caravan guarding the women are the frontiersman Natty Bumppo, Major Duncan Heyward, and the Indians Chingachgook and Uncas, the latter two being the novel&apos;s title characters.
3. The Pathfinder, or The Inland Sea is a historical novel by James Fenimore Cooper, first published in 1840. It is the fourth novel Cooper wrote featuring Natty Bumppo, his fictitious frontier hero, and the third chronological episode of the Leatherstocking Tales. The inland sea of the title is Lake Ontario.
4. The Pioneers, or The Sources of the Susquehanna; a Descriptive Tale is a historical novel by American writer James Fenimore Cooper. It was the first of five novels published which became known as the Leatherstocking Tales. Published in 1823, The Pioneers is the fourth novel in terms of the chronology of the novels&apos; plots.
5. The Prairie: A Tale (1827) is a novel by James Fenimore Cooper, the third novel written by him featuring Natty Bumppo. His fictitious frontier hero Bumppo is never called by his name, but is instead referred to as the trapper or the old man. Chronologically The Prairie is the fifth and final installment of the Leatherstocking Tales, though it was published before The Pathfinder (1840) and The Deerslayer (1841). It depicts Natty in the final year of his life still proving helpful to people in distress on the American frontier.
Nach oben