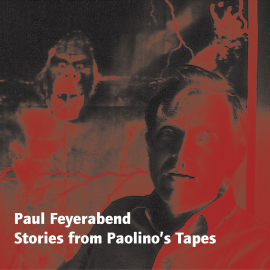 "All the material is excerpted from personal tapes Paul sent to me. It was never meant to be edited or listened to by anyone else. I agree with releasing it for this edition as I believe Paul tells marvelous tales, which can be enjoyed by more people than I alone. He conveys beautifully his love of opera, theatre, cinema and the respect, compassion, admiration and sense of wonder he felt for many people." (Grazia Borrini-Feyerabend)

01 The Threepenny Opera
A tiny commentary on the wrong rendition in English of a piece from this opera, describing how he was impressed by a single line in Brecht's libretto.
02 Falstaff
On Verdi's opera after Shakespeare.
03 Fury
The story of Fritz Lang's movie.
04 Schroedinger
Description of what kind of person the physicist Erwin Schroedinger was and Feyerabend's relationship with him.
05 Macbeth
Feyerabend reads Verdi's thoughts on Lady Macbeth's sleepwalking scene: una macchia.
06 Xenophanes
Some Xenophanes fragments, read by Feyerabend in his own translation, attempting to respect the original metric rhythm.
07 Paul Robeson, Joe Louis, Max Schmeling
Feyerabend explains a lullaby sung by Paul Robeson, describes the life of this American football star and also a bit of the story of Joe Lewis and Max Schmeling.
Nach oben