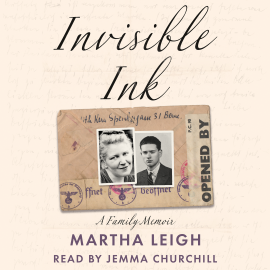 Martha&apos;s parents were both extraordinary people living in extraordinary times. Ralph was a brilliant, poor Jew from the East End. Edith, also Jewish from a bourgeois family in Central Europe was a gifted pianist. They met as students in Paris in 1937 and were separated by the war. Their intimate, emotional and sometimes humorous correspondence throughout the war led to marriage in 1945. Each bore scars. She, from escaping the Nazis, he from childhood tragedy. Overshadowing them both was a secret that burdened Ralph for most of his life. After the war he became the world expert on Jean-Jacques Rousseau and Edith devoted herself to her piano, performing and teaching. Invisible Ink is a compassionate, astute and ultimately uplifting portrait of their relationship.
The author has also unearthed many other stories: her uncle&apos;s heroism and pioneering work in medicine, her grandmother and cousin&apos;s miraculous escapes from the holocaust. These are threads entwined in the greater tapestry of social and political history of the twentieth century. In discovering the truth about her family, Martha has also taken an inner journey towards understanding herself.
Nach oben