A Night in a Moorish Harem 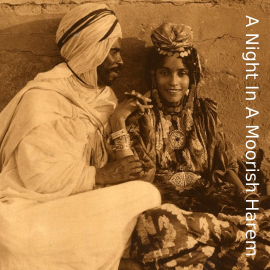 A Night in a Moorish Harem tells the thrilling story of a shipwrecked British sea captain who, in 1894, washes ashore near a Moroccan harem. When his ship, Antler, becomes stranded off the coast of Morocco, Lord George Herbert is taken in for the night by the concubines of a local harem whose master is away. Herbert seizes the opportunity offered to him and spends the night taking pleasure in the eager women and convincing the nine ladies, each of a different nationality, to tell the collective stories of her sexual histories. In return, he tells stories of his own exploits. Clearly a work of the author's imagination it nonetheless offers us an entertaining insight into the cosmopolitan world of Victorian erotic fiction.