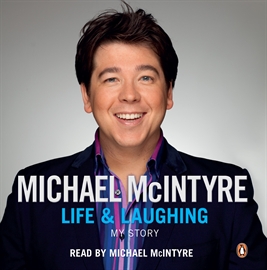 Laugh out loud with this unabridged, downloadable audiobook edition of Michael McIntyre&#39;s brilliantly funny and honest account of his life so far, Life and Laughing: My Story, read by the comedian himself.

Michael McIntyre has become Britain&#39;s biggest comedy star. His debut stand-up DVD, Live &amp;amp; Laughing, was the fastest selling of all time, only to be eclipsed by his second, Hello Wembley, that sold over 1.4 million copies and was the 2009 Christmas number one. He hosts his own BAFTA nominated BBC1 series, Michael McIntyre&#39;s Comedy Roadshow, and won the British Comedy Award for Best Live Stand-up in 2009 following his record breaking fifty-four date Arena tour.

But how did he get there?

Michael reveals all and gives a hilarious performance in this audio edition of his remarkably honest autobiography. His showbiz roots, his appalling attempts to attract the opposite sex, his fish-out-of-water move from public to state school and his astonishing journey from selling just one ticket at the Edinburgh Festival to selling half a million tickets on his last tour. Michael&#39;s story is riveting, poignant, romantic and above all very, very funny.