The Enchanted Horse, a 1001 nights fairytale 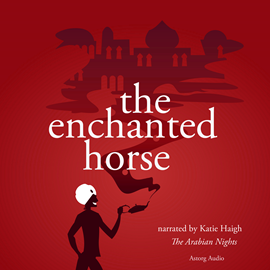 The enchanted horse » is a story that belongs to the Thousand and One Nights. “Once upon a time, there lived a Sultan in the land of Persia, who had two beautiful children who grew up to be the Prince and Princess of Persia.

One day during a celebration, an Indian approached the Sultan about an enchanted horse he owned that would take the Sultan anywhere he wished in a very short period of time. The Sultan, doubtful about the contraption, sent his son to investigate this horse. When the Prince mounted the horse, he quickly pressed the button that took him high into the air. Wishing to see the country of Bengal because he had never been there, he directed the horse towards that kingdom. He arrived in the dead of the night and landed directly over the Princess of Bengal’s chambers at the palace...