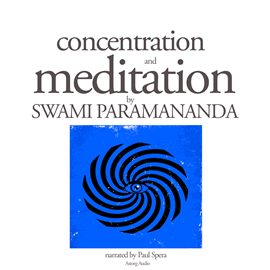 Concentration and meditation by Swami Paramanda, author of "Soul's secret door", "the Way of peace and blessedness", ''Reincarnation and immortality". In this audiobook : concentration, meditation, aids to meditation, practical hints : fixity of purpose, Practice of Concentration, Methods of Meditation.

Paramananda (1884–1940) was a swami and one of the early Indian teachers who went to the United States to spread the Vedanta philosophy and religion there. He was a mystic, a poet and an innovator in spiritual community living. Paramananda was sent to America in 1906 at the age of twenty-two to assist at the previously established New York Vedanta Society. He lived and taught there until 1909, when Paramananda established the Vedanta Centre of Boston.

He lectured throughout the United States, Europe and Asia for thirty-four years, until his death in 1940. He founded four centres still thriving today, two in the United States and two in Calcutta, India. The American ashramas are in Cohasset, Massachusetts and La Crescenta, California. Like his teacher, Vivekananda, Paramananda believed in equality between men and women. About the audiobook : we all possess the faculty of concentration, but with the majority it is instinctive and automatic, not conscious. Even among the animals we see how a lion or tiger will gather his strength by a moment of absolute stillness before he springs upon his prey ; that automatic, instinctive power of concentration is embeddedin every living creature.

But until we can gain conscious command over our mental and spiritual forces, we can never have complete concentration. When the scattered mind is gathered together it is like a bright searchlight, and by it man is able to investigate the latent powers which he possesses but of which he is not now wholly aware. As he grows more conscious of these hidden forces and learns to use them, he becomes more and more proficient.