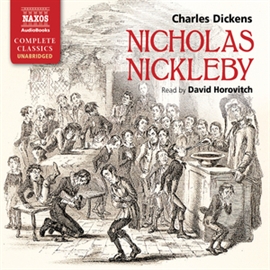 Left penniless at his father’s death, Nicholas Nickleby and his mother and sister turn to their wealthy uncle Ralph for support. But Ralph is a cruel usurer who despises Nicholas’s open-hearted character and despatches him to teach at Dotheboys Hall, run by the grotesque Wackford Squeers. Appalled, Nicholas rebels against the cruelty there and determines to take care of his family and his new friend, the helpless and abandoned Smike. Brimful of brilliant comedy, peopled by scores of memorable characters and touched by powerful satire against injustice, Nicholas Nickleby established Dickens as the finest novelist in English.
Naxos AudioBooks
Back to top